Is Your Team Fully Engaged?

As you begin 2017 do you believe your team is fully committed? Is your leadership team all in? Are your sales reps all in? Is your customer support team and operations team all in?

Employee engagement and team dysfunctionality are two areas that suck the life out of a leader. The leader knows that his/her people are not giving it their all or are not working as a team, but he/she may not have the knowledge to solve the problem. 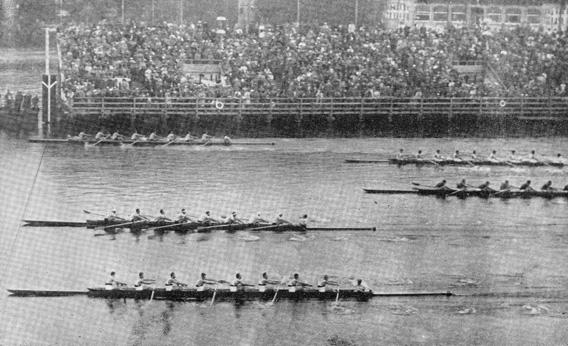 Above is the picture of the team coming from way behind winning the gold. They overcome the incredible noise of the German crowd and one crew member who was battling the flu.

The story is as much about the coach and his incredible ability to instill motivation and desire into a team as it is about the team of 8 and a their incredible coxswain. The coach had to build the team, mold the team and support the team through 4 years of incredibly hard training. To win required full engagement, even when one member was very sick with the flu. The Germans had placed the Americans in the worst position and had also started the race incorrectly so the Americans started late. But, becuase this team had the vision, were fully bought in and had the skills, they overcame the great odds and won!

Do your people have those three things?

The first thing about having your people fully engaged is “Do they understand your values and mission?” Does each team member truly understand what your organization is trying to accomplish and why that is important? Do they “Get it”? This is a key question. For a person to be fully engaged they must truly understand and believe your corporate values and the purpose of the company. The challenge here is that what are stated values and what the values are in reality may be different. If you, as the senior leader, are not living out and holding others accountable to the stated corporate values, then employees know that the stated values are really not important. The real value, though unstated, is “We don’t hold people accountable. You can believe what you want.”

Secondly, for full engagement ask “Does the employee truly want it? They may understand the values and mission, but do they truly desire to achieve that mission? Are they willing to put forth the effort, above what is stated, i.e go the extra mile? This is a personal motivation issue. Many times the person’s personal life is so messed up that they are more focused on getting themselves out of a crisis than helping achieve the mission. Short term a leader can tolerate this, but in the long term the employee is not really engaged and not handling their “oar” in the boat as the others need them to. Disengaged employee costs money.

Thirdly, does the employee have the competence to do the job. This is a two-part question. First part is does the employee have the right personality for the job? Is there a good job fit for this person in personality and IQ. Some personalities or IQs just won’t work in some positions. For instance, don’t ask me to do a highly detailed job. I would screw everything up. Don’t ask a highly detailed person to be innovative and a creative problem solver. The second component is their capabilities. Does the person have the right skill sets to perform and can they be trained in a timely manner if they don’t.

People that are in the wrong job because their personality, IQ or skill sets don’t match can not only cause that particular person to be disengaged but also others to be disengaged. When someone can’t do their job properly and are not held accountable, other employees see that and then slack off themselves. The wise adage is to hire slowly and fire quickly.

There are several other components to getting employees to be fully engaged. I will cover those in my next blog posts:

Developing and Keeping a Positive Attitude in Hard Times

Blogs
No Comments
Developing or Adjusting Your Attitude in Hard Times I have heard many people say “Attitude is everything.” Attitude does...

4 Sales Training Pitfalls & How to Avoid Them

Sales
No Comments
Winning teams are always looking for ways to improve.  For sales organizations, that means investing in sales training and...

Blogs, Sales
No Comments
Many sales managers have become frustrated with sales training programs and have largely given up on pursuing training for...

Why You Can't "Manage" Sales - And What You Should Do Instead

Blogs, Sales
No Comments
Many organizations unwittingly suffer from a bad habit that greatly diminishes sales performance:  sales managers who spend too...